Shopping Cart
Your Cart is Empty
Quantity:
Subtotal
Taxes
Shipping
Total
There was an error with PayPalClick here to try again

Thank you for your business!You should be receiving an order confirmation from Paypal shortly.Exit Shopping Cart

At the 75th Perterbilt Annversery truck show Oct.25th in Stockton, Ca. Cherokee Truck Parts crew held an auction for the Shriners Hospital for Children and raised over $24000.00. Bob has presented the check to the SHC-Northern California.

There were almost 400 Peterbilt trucks from all over the country at the show. for a review of the trucke go to http://youtu.be/FpgwI3lV3ww or our photo gallery

Any Brothers who are CDL-A drivers who are looking for Regional driving jobs in the Indiana, western Ohio, southern Michigan, or central NJ area please get in touch with me!!!! I have a bunch of positions open with great pay and benefits, and IN,OH, MI are HOME WEEKENDS!!! NJ would be 10-14 days out with 3-4 days home! You can talk to a brother and a driver for a change instead of someone who has never jammed a few gears.

The members of the Wisconsin Masonic family come together and presented thier love for a masonic brother in the form of a Big Rig Trailer in his honor.

Tom Tourville was a masons mason, he spent many years,months, dys and hours living Masonery and helping its many bodies.

The Big Rigs of the Shrine presented a copy of the Tom Tourville Big Rig to the Grand Master of Wisconsin and it will be placed for all to see in the Grand Lodge.

Watch for the Tom Tourville Trailer on the Hwy in your area! 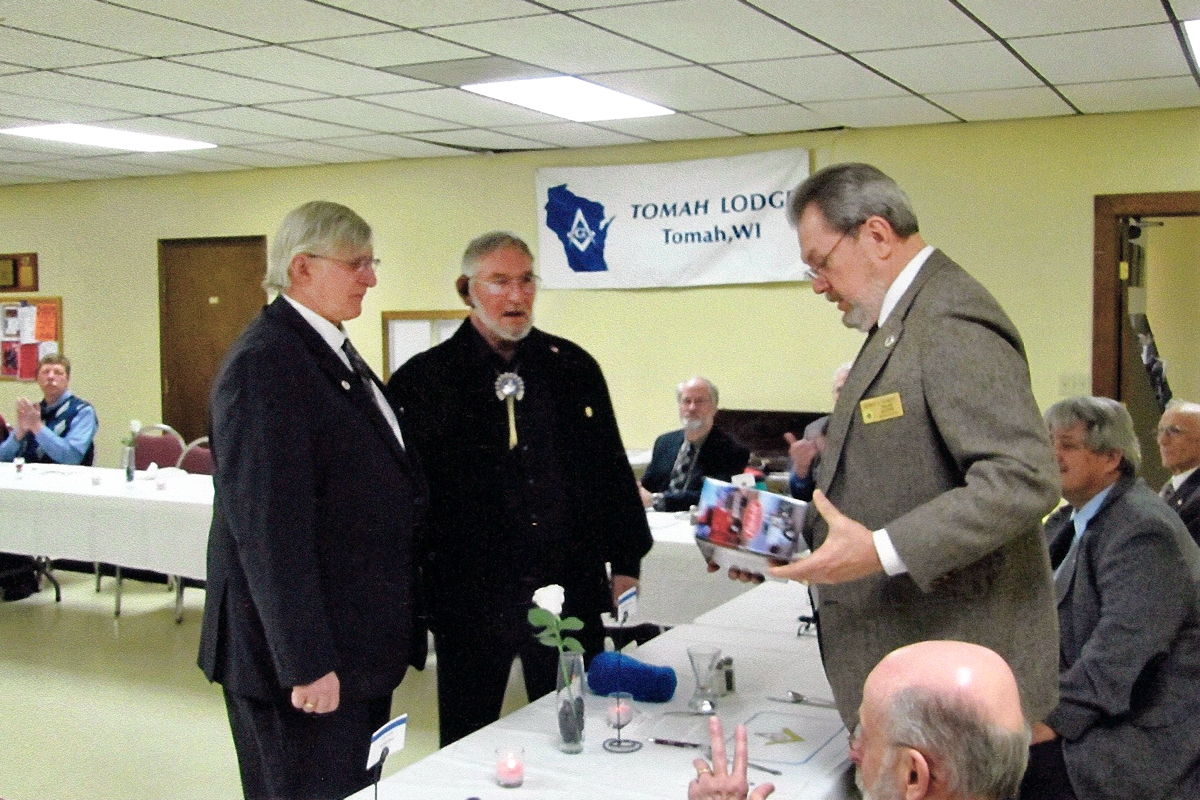 There will be a new Big Rigs of the Shrine Trailor ad the week of the 2013 East west Shrine game . The trailor will feature a great support of the Shriners Hospital for Children,

Don't miss the game or the trailor. The game is January 19, Tropicana Field, St Petersburg,Fl.  http/www.shrinegame.com/

My Journey by Mollie Carlson

However, it started out like this....I was 13 and helping a lady serve dinner to the North Central Kansas Shrine Club in the little town of Norway, Kansas. The program didn't show up that evening, so I was asked to share my experiences at Shriners Hospitals for Children. I was pretty comfortable with it, as I knew most of the people in attendance.

This was the night that I met T. Mike and Debbie, the very first Potentate and First Lady I had ever met!!! Pretty neat, huh?! The next few years were filled with speaking on a local level and statewide as an ambassador for Shriners Hospital for Children-Chicago and Shriners Hospital for Children-St. Louis. It was just in July 2007 that I would be introduced to some very special people in my life, in none other than HAYS, Kansas! Pretty ironic that I go to school there now!

Those awesome people were Imp. Sir Jerry Gantt, and Lady Lisa (which, by the way I couldn't say in a million years now....they are Mama Lisa and Papa Jerry----and will be for the rest of my life!) It was kind of a funny story, at 16 years old, I just left for Hays, calling my parents when I got out there----very little money, no place to stay and no plan....but I was going to make it work, because I wanted to go to the Kansas Shrine Bowl! I am so glad I went because I would have never met some spectacular people! Isn't it funny how life works sometimes?

After no contact with her and now a year later in St. Louis, MO for Imperial, July 2008, you can only imagine the look on my face when Lisa Gantt called me by name and told me that she wanted me to meet a friend of hers. I mean, and Imperial Lady remembered who I was----she meets so many people in a year, and SHE remembered ME! When I attended Session in St. Louis, I thought it would be the COOLEST thing to meet the Imperial Potentate and First Lady----I mean, that's like meeting the President and First Lady of the United States, right?! Well....in my mind it was!

Nonetheless, Lisa's friend was none other than, Patricia Maxwell (also known as Mama Pat)l----THE FIRST LADY OF SHRINERS INTERNATIONAL 2008-2009!!!! Lisa had told Pat my story and she wanted her to meet me! After a short conversation, Pat told me a secret about her program, one that I would never forget. Soon after meeting her, I went downtown and also got to meet Doug, Patricia's husband......AND DAVID RAGAN!!!!!!!

I soon began my Senior Year in High School and was gone for extended periods of time for surgery, leaving little time to dedicate to the Shrine. Little did I know that I would be receiving a phone call from Shriners International on Feb. 26, 2009, asking me to be THAT kid in the video! I was beyond shocked, How could they have even really heard of me....who told them??! Well, I was the one that was surprised when the filming started and when it came time to film in Scandia, I came home from school to find that Lisa and Jerry were involved and were in Scandia, KS! As the story goes, the video debuted with Sage and his family too in San Antonio, TX, July 8th, 2009.

What an awesome week that was in TX!! Wow, this sure has been an amazing journey so far---yet it's far from being over! I couldn't possbily begin to tell you all the places I have been, people I have met along the way and life lessons I have learned (far from anything I could learn in a book). I am so blessed to be able to share such a wonderful relationship with the Imperial Family (and all of my Shrine Family for that matter).

Each new place that I visit leads to new opportunities. I guess I can say that my second home is Charlotte, I lived in that area for awhile, going to school and developing close relationships to the Nobles and Ladies of Oasis Shriners. Oasis Temple welcomed me with open arms (as did the Temples in the surrounding areas!) It was because of my committment to Shriners and wanting to be so involved with Oasis that I was chosen to represent Oasis on the side of not only one, but two Tractor-Trailers (Semi-trucks in "Kansas" lingo!).

Now that's not something many people can say they have done....traveled the USA on the side of an 18-wheeler! I have loved meeting all the other Ambassadors, who have basically become like brothers and sisters to me and are such inspirations! I only wish that I could express my graditude to ALL of the wonderful men and women that have helped me through Shriners! Now without all their love and support, I would have never made it through college, and I am currently just 5 weeks away from my Bachelor's Degree and headed into Graduate School this fall. It's been hard to say no to speaking for Shriners, but I have had to with school. I can't wait to see so many of my "family and friends" in Charlotte, coming up in July! I decided with this being my first summer off in 5 years (and probably one of my last off ever...) I had better just make the best of it, and what better way than a trip to see so many of my favorite people in one place!!!

Sorry for this being so long! Just thought I would share some of my story on the journey prior to and of being an Shriners International Patient Ambassador. Can't wait to see you all!

There have been several requests to pay for the signage on trailers in different parts of the country.

There is a need for rigs that only travel the west coast or mid west or the southern states. if you have a trailer that you would let us cover with the Shriners Hospital  signage and only traveles a certain region let us know.

Another New Rig on the Road

The Red Fez Shrine Club of Charlott So. Corolina has a rig with  the picture of Brandy Whipple 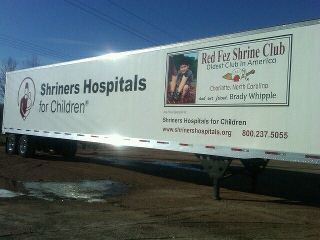 The Big Rigs of the Shrine National meeting is set for May 4-5 2012 at the Cherokee Truck Parts  Show for the Shriners Hospital for Children at the Galt Market grounds, Galt, Ca

For information on the Show go to http://http://cherokeetruckparts.com/

The big rig with Megans Picture has made it's way to North Carolina for the Charoltte Shriners of Oasis to get a good look at what they have done for a great Shriners Kid. who has given back to so many.

New Trailer on the Road 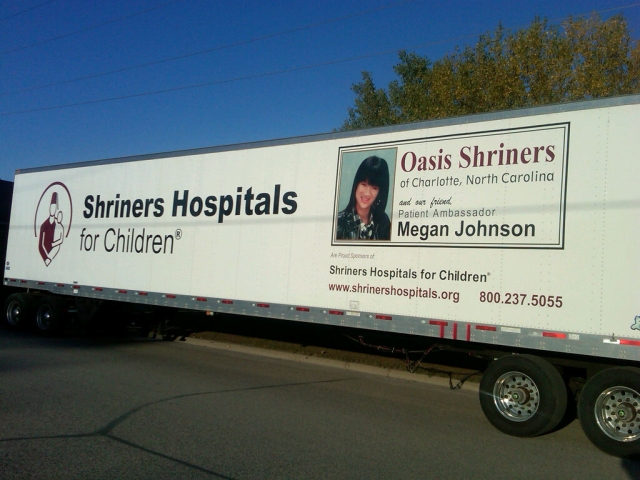 The Oasis Shriners have set up a trailer for Megan Johnson. Look for it on the road.